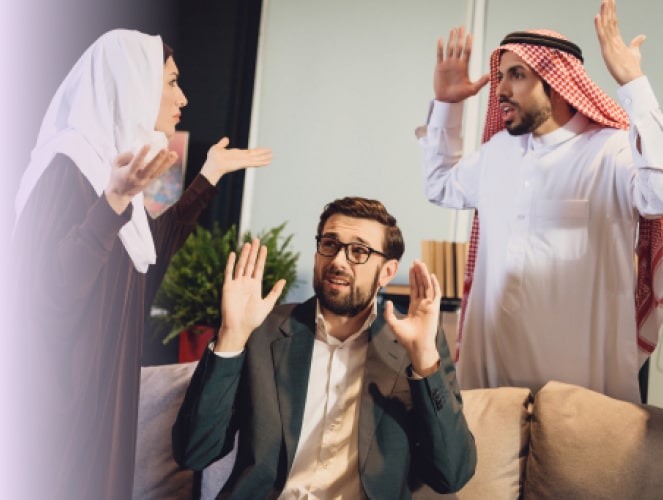 Our dedicated team specialises in UK Islamic divorces and Islamic family law, helping you take care of all your family law matters in accordance with your faith. We can offer our expert guidance and support to both Husbands and Wives with:

Got a Question? We’re here to answer. If you don’t find your question below, contact us now.
What is a Marriage?

In Islam, a couple enter their marriage by signing a ‘Nikah’. In England and Wales, a Nikah is not recognised as a legally valid marriage, unless it is registered at a Registry Office. So, if only a Nikah is completed, it will be acknowledged under Islam
but not under the laws of England and Wales.

In these circumstances, it means that it is unlikely that either party would be able to depend on English Matrimonial Law should they want to separate. The involvement of the courts would largely depend on whether they have any Children and whether they own property.

If a couple has celebrated both a Nikah and a Civil Ceremony, then they can go through both an Islamic divorce and a civil divorce so that they are separated both legally in the UK and under Islam.

Note that if a couple undertake a Nikah in a country where Islamic Marriage is legally recognised, then they do not need to register it in England as it will be recognised as a valid Marriage.

A Talaq is a divorce initiated by the husband in an Islamic Marriage. A Talaq will only end the Marriage under Islam. The marriage under English law still remains following a Talaq, therefore, the couple will also need to seek a divorce under English Law. If a husband initiates a Talaq, he must also pay the “Haq Mehr”. This is the gift or amount of money that he agreed to pay his wife when they married and if they were ever to divorce.

In the event of Talaq, this means that the husband has broken the contract of the Nikah so must pay the Haq Mehr in full if it was previously deferred or allow her to keep it if he has already paid it in full.

What is a Divorce – (Khula/Faskh)?

Khula and Faskh are the two ways in which Islamic Marriage can be ended by the woman. If the couple entered a Civil Marriage in the UK, they would also have to file for divorce under UK law.

A Khula is where the wife and husband give their mutual consent to divorce. Specific terms may be agreed, for example, the wife returning the Mehr.

A Faskh is where the wife can apply to divorce the husband without his consent if he unreasonably refuses to give Talaq despite the marriage having broken down and if an amicable agreement cannot be made. This is similar to an annulment and can be used in cases of forced marriage.

Our solicitors are experts in Islamic Family Law and Divorce, so are ideally positioned to guide you through this difficult time. We place an emphasis on cultural sensitivity and have helped many individuals across the country through the sensitive process of separating.